and the winner is...

argyll's revenge! they played last saturday night at carnegie mellon university's battle of the bands and WON! they won a $150 gift card to guitar center and will be playing on october 29th for cmu's homecoming! i am excited for the boys and look forward to hearing them play! hooray!
Posted by rachel at 6:16 AM 2 comments:

the sweetest place on earth 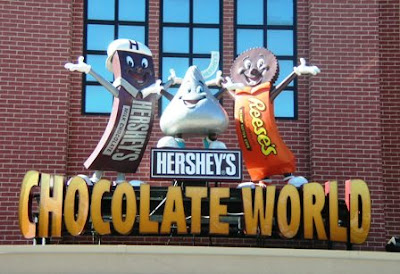 i have been in camp hill/carlisle pa for the last couple days. due to the g-20 summit being held in pgh, our office was moved here this week. i arrived early thursday. let me tell you, it has been a nice but weird experience. i am not used to having quiet time to myself. today i slept in until 10:30 am! it was lovely. when i woke, my friend, stephanie, and i headed to hershey, pa. neither of us had been before. it was a really neat experience. unfortunately, i did not bring my camera for pictures.

we did not have time to go to the amusement park or take the trolley tour, however, we did go on the chocolate tour and took the chocolate tasting adventure class. just so you know, it is now official. i have my master's in chocolate tasting! i also had so much fun buying treats for my boys. i look forward to bringing them to hershey at some point. thanks, steph, for the fun time! 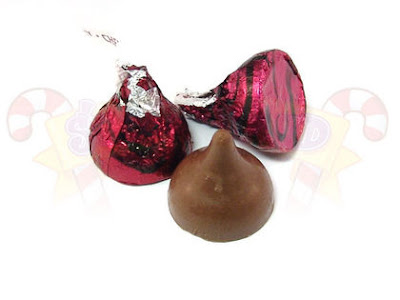 my favorite candy
Posted by rachel at 5:29 PM 4 comments:

after a summer hiatus, argyll's revenge is back in the groove. wed night they played the rock-n-bowl at arsenal lanes. it was a jolly good time. on saturday, from 3-4, they will be playing a block party in greenfield. let me know if you need any more details. here are a couple pics of wed night's fun. please make special note of ben's hard core stache. 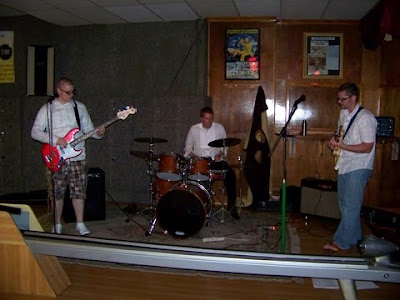 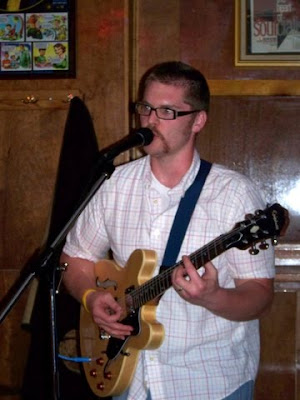 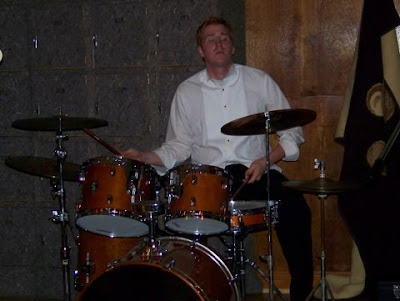 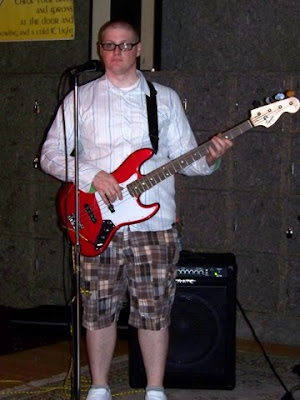 Posted by rachel at 8:58 AM No comments:

i had this little dude. he is great! and i love him. 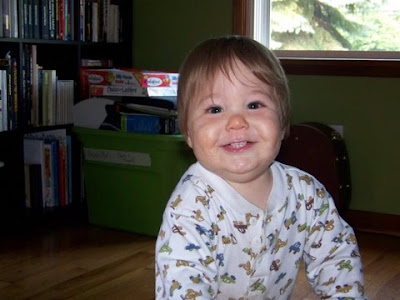 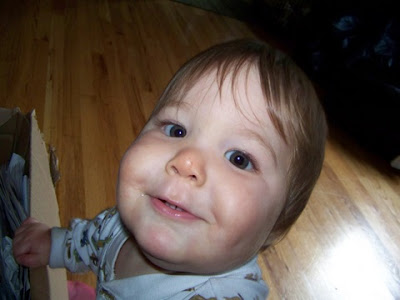 what do you remember?

this was the question i asked jonas after he watched president obama's speech on friday. he said, "never give up." AWESOME!
Posted by rachel at 11:37 PM 1 comment:

i know this is a day that is held in remembrance for many. a day of sorrow in which many lives were unfortunately and unfairly lost. i hope that we can all take some time today to offer a prayer of thanksgiving for those that have made sacrifices to serve our wonderful country. i know i am grateful for all the soldiers, fire fighters, ems workers, and police offers that serve us daily. today, i wore my red, white, and blue. i know it is cliche, but i am proud to be an american. i know we are free: free to live our lives how we choose, to worship how we choose, and to remember as we choose.

today at jomi's school, we were asked to bring in cookies. the cookies were then boxed up and distributed by the children and their parents to local police, ems, and fire stations. the kids made thank you cards to deliver along with the cookies. we brought ours to the penn hills universal volunteer fire station #6. i was teary eyed as the boys offered their cookies and said thank you. such a little act of love, but one that helps us remember those that sacrifice daily for each of us.
Posted by rachel at 8:10 PM 1 comment:

i love these 3 little guys in my life. i am happy to have them. but it is so difficult to get a picture of the 3 of them together. here are a couple of my attempts. 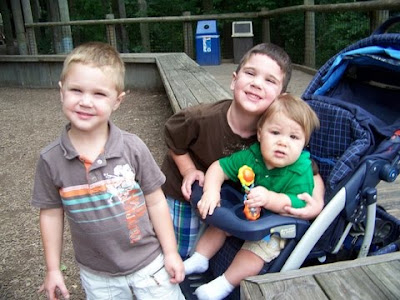 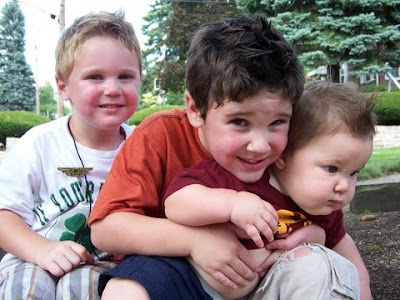 ok, so it is september, but yesterday jonas was working on his christmas list. he then put his list in an envelope and put a school bus stamp on it. he asked me to dictate a note to santa for him. i had to post what it said.

did you have a nice summer? how's your wife? i hope you bring me lots of presents. i've been a very good boy.

jonas' first day of school was great! i woke up at 7:30 am and found him sitting on the couch, dressed in school clothes, with his hat on, all ready to go! he was all smiles and insisted on riding the bus. i had wanted to drop him off to which he replied, "you can drop me off at the bus stop, mommy." so, we all made the trek (1 block away) to the bus stop. the bus was 25 minutes late! but it came and jonas happily jumped on. he was so excited and totally hamming up for the camera too. such a cutie. it was weird not having him home during the day, but after school, we picked him up at the bus stop and headed to max and erma's for a celebratory dinner. when i asked him how his day went, he replied, "good. i didn't go to the principal's office." and he had a green smiley sticker for today. all is well! here is my big boy! i can't believe i have a kindergartener! 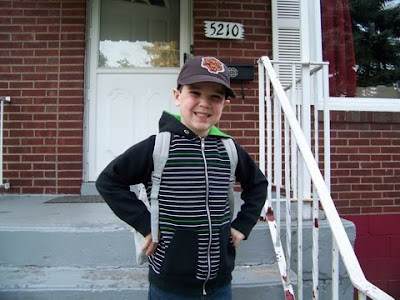 all smiles leaving the house 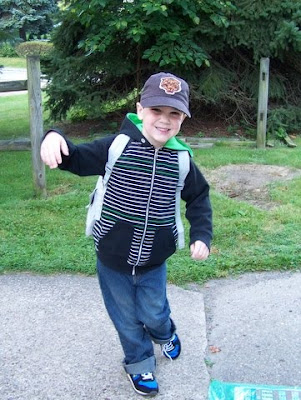 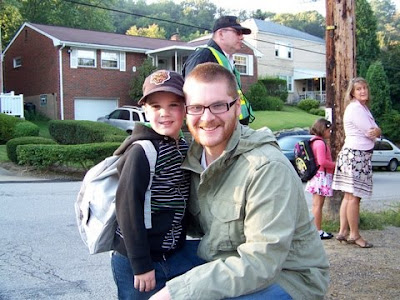 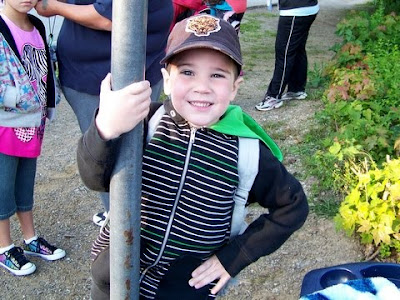 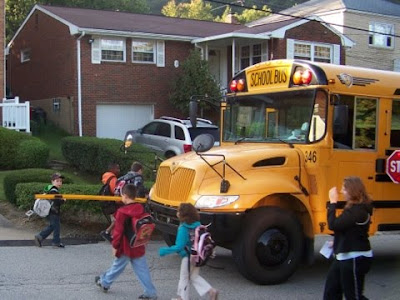 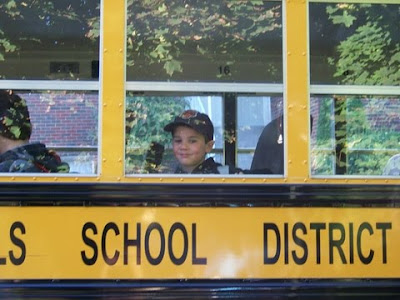 jonas had kindergarten orientation this morning at forbes elementary. ben and i both went, thanks to my friend, anna, who watched gryffie and porter. we had the chance to see the school, meet jomi's teacher, mrs. yohe, and meet the principal, mrs. brown. both seemed FABULOUS! ben and i were impressed. jonas has his own little desk, which he was able to pick on his own. mrs. yohe seems to have a very structured and fun learning environment. i think jonas is excited, although nervous. probably his favorite part of the day was riding the bus. ben and i are excited to be involved in the pta and assist as able. jonas will have his first day tomorrow, and is insistent that he ride the bus, so we will be taking him to the bus stop at 7:55 am. tomorrow, neither ben nor i have class or work, so after school we are taking jonas and the other boys out to dinner. jonas picked subway. crazy kid.

i have to mention the rest of my day, which was great. after orientation, i dropped ben and the younger boys off at home. jonas and i went shopping at the children's place for some school clothes. then we went to baskin robbins for ice cream and then to the library. jonas picked out some movies and books, and i already read two of them to him (we are asked to read with him 1 book per day). also, ben had requested the new arctic monkeys' cd- humbug- which is awesome. i listened to it on my way to work. after getting home, the boys watched barney's halloween (1 of the movies jomi picked out) and i made chocolate chip cookies. it was a good day!
Posted by rachel at 7:41 PM 1 comment: