some of you may know that ben was on crutches for almost a week approximately 2 weeks ago. well, i wanted you all to see his arch nemesis. the metal pole, sticking approximately 1 foot out of the ground at the end of someone's driveway.

ben has been training to run a half-marathon and then is hoping to run the pittsburgh marathon next spring. he often waits to go running until 8:00 pm, after the boys go to sleep. ben was nearing mile 8 of his 10 mile run when he was rudely accosted by this piece of rebar. not cool. the cut was 15 cm long, 1 inch deep and 1 inch wide. thank goodness ben happended to bring his cell phone with him. he called me, i called jane, our neighbor who came over within 5 minutes, and then ben's sister, beth, came and relieved jane. by the time i got to ben, he had already walked 1 more mile. we quickly went to the emergency room and were lucky to be in and out within 2 hours, 16 stitches later (thanks to my connection as emergency room social worker) and with ben hyped up on vicodin. the stitches have since been taken out, and ben's leg is healing. (we will not include pictures of the wound due to it's graphic nature, however, they are available by request). 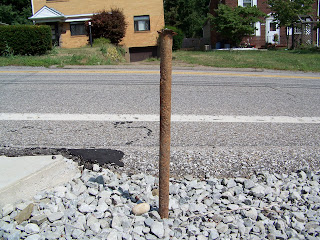 Hospital?!...What are you some kind of sissy? Just rub some dirt on it!

Love that photos are available upon request. Very Keller of you.

(And no, this isn't me requesting photos. Blech!)

ouch! that hurts (not being able to run for awhile, that is)

I want to see all the gorey graphics. I thought Ben was looking slim. Good luck on the half-marathon. I have that goal, too, but I'm not doing anything about it.

You'll get there, Em. I will send you some pics once I actually get on the home computer.